History of the Challenge Coin 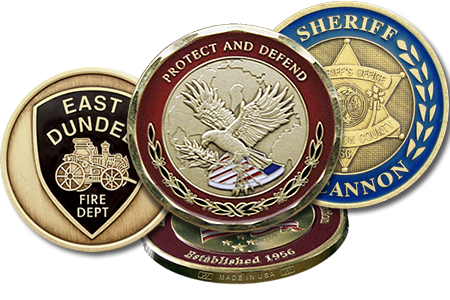 Challenge coins are carried as a symbol of pride, teamwork and unity amongst the bravest of our society. Wendell’s is proud to continue bringing this legacy to our military, police and fire services nationwide.

There are many conflicting origin stories for the challenge coin from every branch of service but the most popularly supported lies in the history of the US Army Air Service. This branch existed during World War I as the forerunner to the United States Air Force. The fledgling flying squadron division was staffed by primarily volunteer pilots from all walks of life who were excited to be able to use such advanced technology while serving their country. This excitement drew people in from shore to shore- -from farms, factories and universities the youth of America were stirred to action.

To commemorate the excitement of the times one of the wealthier lieutenants created die-struck bronze medallions for the pilots in his squadron to serve as a memento of their teamwork. Rumored to have been gold plated and finely detailed the pilots treasured this gift and kept them closely guarded during their travels.

As the Army Air Service made her way across Europe one of the squadron’s aircraft sustained damage forcing the pilot to land on enemy territory. Captured by the German army the pilot’s belongings were confiscated and he was sent to a prisoner of war facility. The pilot’s captors had, however, missed one small detail. The pilot had managed to keep his squadron medallion in a leather pouch around his neck.

In an additional turn of odd luck as the soldier was being transported to the POW camp the transport group stopped at an occupied village en route to rest the night before continuing. Overnight this village was raided by the British and during the general confusion the soldier managed to escape captivity. Wearing civilian clothing the soldier raced towards safety. Once he reached allied French soldiers he soon realized the danger was not past. Warned of saboteurs dressed as local citizens, the French soldiers demanded proof of identity. With all of his official information in enemy hands, how could he prove that he was actually an American pilot to the security patrol?

As he stood facing guaranteed execution the soldier pulled the medallion from around his neck. Recognizing the unit insignia on the coin one of the new captors called for a stay of execution long enough to confirm the soldier’s identity. Upon returning home news of the soldier’s plight spread. Soon what began as a simple gift amongst teammates became a proud military tradition amongst service men and women that lasts to this day.